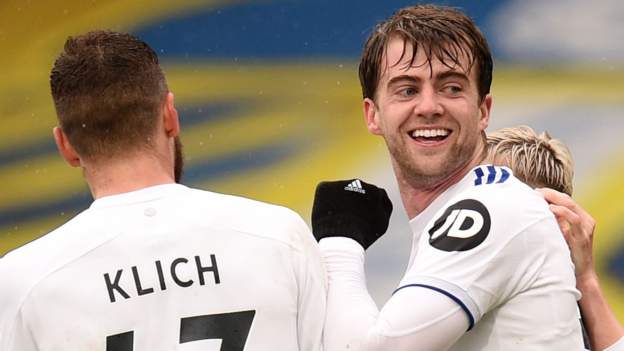 In an absorbing game at Elland Road, Stuart Dallas put Leeds ahead with his eighth league goal of the season, the Northern Ireland midfielder pouncing from close range after Hugo Lloris’ terrific reaction save to prevent Sergio Reguilon putting through his own net.

The lead lasted 12 minutes, Son Heung-min equalising with a clinical finish after Dele Alli was allowed to run unchallenged before threading a clever pass into the South Korea forward’s path.

On a frustrating day for Spurs, Harry Kane had two goals ruled out for offside and hit the bar from a free-kick, while Illan Meslier produced an excellent save to keep out Serge Aurier’s deflected attempt.

With three matches left, sixth-placed Spurs are five points off fourth spot with both teams immediately above them – West Ham and Chelsea – having games in hand.

Leeds, who started the weekend in 11th spot, climbed above Aston Villa and Arsenal – who both play on Sunday – into ninth.

Southgate, who will this month name his squad for this summer’s delayed Euro 2020 Championship, was at Elland Road to see Bamford score his 15th Premier League goal of the season.

Earlier this season, Southgate said Bamford was close to being called up but opted instead for Aston Villa’s Ollie Watkins.

With countries allowed to select a 26-player squad instead of the usual 23 at this summer’s tournament, Bamford could well be in contention for a first England call at the age of 27.

He has been a key figure in Leeds’ solid return to the top flight and was in the right place to score the decisive goal during a typical hard-working performance by Marcela Bielsa’s side.

Their return to the Premier League has been peppered with memorable moments. Leeds have taken four points off champions-elect Manchester City, won convincingly at third-placed Leicester and played some exciting football throughout.

This high-energy performance was another highlight as they scored three or more goals in a game for the eighth time. They could have scored more.

At 1-1, Lloris produced a one-handed save to keep out Jack Harrison and the Spurs keeper later denied Mateusz Klich at 2-1, before Moreno’s goal, after a superb run and pass by the returning Raphinha, settled it.

The result means Leeds will finish this season unbeaten at home in the league against the so-called big six.

Rate players out of 10 throughout or after the game. The rater will close 30 minutes after the final whistle.

Rating range key1 = Give it up10 = Pure perfection